This village is located in the heart of the Balagne. Since the earliest times, Lumio "village of light", was the centre of a cult dedicated to the Sun. of the village of Lumio

The Romans called the mountain "Solis Ortus", where the sun rises. Grouped around the large baroque church, this large village full of character, looks out over the beautiful Gulf of Calvi. A really picturesque village with its narrow streets and stone houses. From the village square and cafe, the view is breathtaking ! 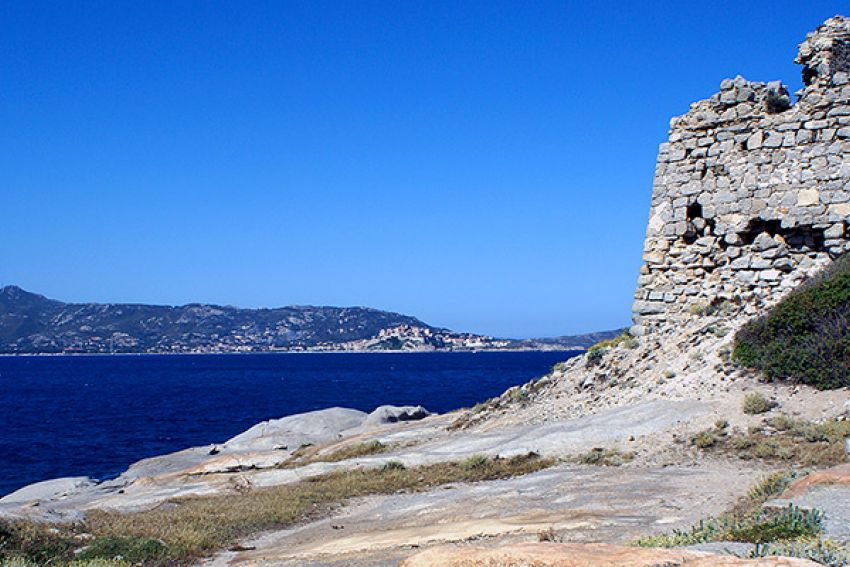 The Genoese tower is a few hundred meters from the Point of Caldanu made up of slabs of characteristic rock. Square in shape, the massive base, well preserved on three sides is completely ruined on the last side. The tip of Spanu

With the island of Spano (a natural site protected by the Conservatoire du Littoral) and the Tower of Spanu.

An old Genoese tower in ruins. Discover the coastline of Pointe Spanu via a walk between the two Genoese towers Caldanu and Spanu, a remarkable place full of history. You can walk easily from the Residence. observatory overlooking the plains and the sea

Situated on a rocky promontory, at the altitude of 377m, the village of Occi is an observatory overlooking the plains and the sea, offering a breathtaking panoramic view. The history of the village dates back to the fifteenth century, at a time when the coastline was not safe from invasion. The inhabitants of a village on the coast, at a place called Spano, fleeing Saracens, took up occupation on the promontory of Occi. In the seventeenth century however the village declined, so that by April 1852, the municipality of Occi only consisted of 62 people. The last inhabitant, Felix Giudicelli died there in 1927.

This ruined village where only the chapel has been restored can be accessed via three walking trails. There is a circuit that includes a detour to the western summit of Capu d'Occi. Chapel of Saint Pierre and Paul

One of the oldest religious buildings, its amazing sculptures and architecture are not to be missed ! Visit the cemetery that surrounds it.

Copyright ©2018-2022 Résidence Club Arinella, all rights reserved - Website made by